Small but Mighty: Meet the JaiaBot

HydroComp’s role in the creation of this micro-sized AUV 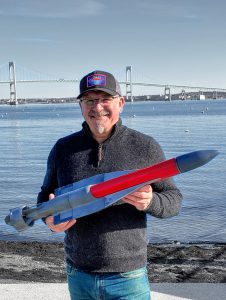 Water makes up approximately 71% of the earth’s surface, but there’s still a wide range of questions about it that need to be answered. From environmental and water quality assessments to hazard and channel marking, information about the ocean has a variety of applications. Jaia Robotics can collect data from challenging places at a scale and a cost that is unprecedented. This will enable our communities to better plan for climate change impacts. How do scientists go about collecting this data? Thanks to Jaia Robotics, this has never been easier, especially with HydroComp providing engineering services for the analysis and optimization of their vehicle.

Founded in 2020 by CEO Ian Estaphan Owen and CTO Jason Webster, this start-up based in Rhode Island (it’s no coincidence this is the Ocean State) creates micro-sized AUVs called JaiaBots. Easy to operate and affordable, the JaiaBot takes the hassle, difficulty, and high expense out of aquatic data collection.

Ian has a longstanding passion for the sea, due to growing up in a coastal town in South Wales and then joining the Royal Navy, which left him with the troubling sights of polluted waters, trails of trash, and oil spills.

He explains the importance of ocean data, “We need to collect information from the ocean to figure out what its interactions are with the environment, how it’s driving the climate change, and what we can do about it.” The JaiaBot is small but mighty at 33 inches long, toting the motto ‘micro is more.’ With three operating modes and an easy-to-learn user interface, aquatic data collection is as simple as ever.

“We started off with a concept design. We had received feedback from potential customers from the work we did with Aquabotix that there was definitely a need for micro-sized vehicles that could work in teams to collect data across wide areas and do it in a way that it captures synoptic data across wide areas,” Ian recalls. Aquabotix is where Ian first worked with Technical Director Donald MacPherson of HydroComp. When they were looking for a subject matter expert to aid them in speeding up the prototype process and de-risk their vehicle design to maximize the probability of success on the first iteration, they knew just who to reach out to.

“One of the driving factors that pushed us to work with HydroComp was we really wanted the vehicle to go fast. There are lots of different approaches you could take – there is a really big design envelope. Jason and I were investing our own time and money as we were bootstrapping the company, and since we were pre-investment at that point, we didn’t have the money to do lots and lots of prototypes. The whole ‘build a prototype, test it, make the tweaks, build it, test it’,” explains Ian. “I think if we had gone down that path, we would still be in the test, learn, re-spin phase.”

“By working with HydroComp, we could focus on our basic needs. It became quite apparent that in order to go at high speed in a way that was stable, we had to quite radically change our concept design,” Ian reflects. They kicked off their product development program in March 2021 and tested their first prototype in September in Narragansett Bay.

“With the help that HydroComp provided, we went from PowerPoint to prototype in six months,” he beams. “It exceeded all our expectations in the way that it performed on that first prototype run.” Alas, their maiden voyage also included a maiden sinking – but that didn’t stop them from popping the Prosecco. Then, the team was ready to work on their second prototype.

“Based on the data we collected from the first run, we were able to put offsets into the rudder, increase the size of the control surfaces to the elevators, and did a second run two or three weeks later – and that was awesome,” shares Ian. “We had better control of the vehicle and we are in the process of fine-tuning PID loops to optimize control.”

Don remembers the project, “The vehicle has three very distinct modes of operation – surface sprint, submerged UV transit, and astern water-column descending modes.” The simultaneous needs made this project special, according to Don. He states, “This required a compromise design that met the objectives of all three modes, while optimizing the design based on each mode’s duty profile. Our role was to provide recommendations and suggestions based on our experience and observations of the design, and then to predict vehicle and propulsor performance in all three modes using our hydrodynamic tools and CFD assets.”

He says that these competing variables made the JaiaBot a fun challenge – something that HydroComp always welcomes. “This was an interesting project in that we were working to find the ‘sweet spot’ for overall performance while considering the competing hydrodynamic objectives,” notes Don. “All design projects face challenges during their evolution, but we were able to quickly evaluate major performance hurdles early on, such as the prototype’s tendency for dynamic instability. A proposed modification to the vehicle body shape and appendages greatly improved running stability in its surface sprint mode.”

While the JaiaBot continues to evolve and transform into a finalized product, Ian says, “We’ve asked Don a couple of follow-up questions on a few areas of the design and he’s responded quickly – it’s been great.” Eventually, JaiaBot will undergo additional design changes, such as incorporating larger sensors, as these contribute to key product features. Don will resume his role as a knowledgeable resource.

Looking to the future, Ian is confident that JaiaBot will be an invaluable climate change tool. Of course, all communities, both coastal and inland, will be impacted by climate change. He goes on to describe his vision. “I just imagine a world where you have, across the globe, collaboration on data collection and modeling for climate change at the global, national and regional and even town levels. We can provide that data collection at scale in places where nobody else can go – like marshes and rivers, as well as ocean depths up to 100 meters deep.”

HydroComp is pleased to work with a company that cares about the health of the planet. “Providing software and services that contribute to sustainability has been a hallmark of the HydroComp brand for decades,” says Don proudly. “The JaiaBot project is a continuation of that work, and we are pleased to be a small contributor to their efforts and goals.”

With an excited smile, Ian concludes, “We imagine a place where Jaia Robotics gives that capability to scientists, engineers, different elements of academia, and government – to really understand and help them deliver the data that they need at scale, very, very quickly and very, very, affordably.” In the meantime, Ian and the team will be back on the water to test their third prototype. We’re eager to witness JaiaBot showing the world what it can do and joining the fight against climate change.