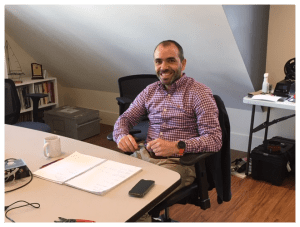 Adrian Sarasquete’s history with HydroComp began when he met Managing Director Jill Aaron at an exhibition in Amsterdam sixteen years ago. So began a long-lasting relationship.

Adrian began his engineering career studying at the School of Naval and Industrial Engineers in Ferrol, Spain. Upon graduation, he joined the engineering department of Juliana Constructora Gijonesa in Gijón where he oversaw the basic outfitting engineering, including engine room equipment definition, HVAC, propulsion calculations, specifications and piping diagrams. In 2004, Adrian moved on to a position with Baliño, a company specializing in the manufacture and supply of products to the transportation industry, notably propellers and turbines. It was working at Baliño where he first encountered the need for higher quality propulsion software.

In 2004 on his way to Sweden for CPP training, Adrian took advantage of a flight layover in Amsterdam to meet HydroComp representatives at METSTRADE and to learn more about HydroComp’s products. Although he had spoken with HydroComp’s Technical Director Donald MacPherson on the phone, this was his first face-to-face contact with the team, including Managing Director Jill Aaron.

Adrian was specifically interested in HydroComp software because he noticed there was a lack of strong hydrodynamic software tools. He noted that ship designers were struggling to make better designs and were seeking more robust tools, such as NavCad and other HydroComp tools. The oil crisis in 2007-2008 created an even larger demand for greater efficiency and a need for these types of sophisticated programs.

In 2007, Adrian started working for VICUSdt, (Vicus Desarrollos Tecnologicos) in Vigo, Spain. VICUSdt is well known as one of the key players when it comes to ship hydrodynamics and propulsion. Adrian is responsible for the coordination of the engineering team, speaking with customers, quotations, and organization of the propeller production related to the patterns that are generated for the foundry. He also represents HydroComp software and services in Europe and Latin America. “Some weeks I spend traveling around to visit exhibitions or customers, but about 80% of the time I spend in our office in Vigo. So much activity arises from software sales, engineering consultancy, as well as the propeller sales.”

Adrian realized after that initial meeting in 2004 that the industry was changing by increasing automation of the production processes. To him, HydroComp’s PropCad software was the right solution. According to Adrian, “some foundries were still operating in the past and now we are slowly moving into the digital world. These Foundries needed to work in a more integrated CAD environment for the propeller production and inspection. The pressure of the global market on the propeller makers was pushing them to invest in better production tools.”

“There is a lot more competition today due to the global business environment. It’s very easy to shop around, attend a ship design trade show and buy something over the internet. Everybody wants to have the best tools, because they are competing with the best.” according to Adrian.

Buying may be easy, but there was still a big hurdle. The challenge for Adrian was that customers were accustomed to using much simpler tools. Customers needed guidance and were not really aware of the comprehensive capabilities of NavCad, and its library of types of vessels and types of propulsion. Once customers realized what these complex tools could offer and streamline their projects, there was quite a bit of demand. Features such as the profile analysis captured their attention because it would allow them to raise their level of energy efficiency.

“With a single tool,” Adrian says regarding NavCad, “you can now handle all of the propulsion needs of a project.”

Over the years HydroComp and VICUS have collaborated on a number of various technical consulting projects. Each company brings a high level of unique skills which offers customers unparalleled technical expertise, and experience without having to seek out multiple partners. The cooperation of VICUS and HydroComp has created commercial opportunities for both companies as well as propelled additional research in HydroComp software products.

With technology playing an increasing critical role in today’s maritime environment, the pace to advance in-house tools is intensifying rapidly. Companies are recognizing the need to accelerate and acquire more efficient tools and solutions to ensure they offer a competitive advantage. Adrian’s vital role at VICUS is helping to support his clients by bringing them successful products such as HydroComp software, along with proficient engineering expertise. HydroComp is delighted to take part in this strategy and excitedly anticipates more projects with Adrian and the team at VICUSdt.

Since 1984, HydroComp has been a leader in providing hydrodynamic software and services for resistance and propulsion prediction, propeller sizing and design, and forensic performance analysis. Through its unique array of software packages and services, HydroComp now serves over 1200 naval architectural design firms, shipyards, yacht owners, ship operators, propeller designers, universities and militaries around the globe.

Download the full press release:
Interview with Adrian of VicusDT