Spotlight on Osborne Propellers: A New Chapter for an 80 Year Old Company

Osborne Propellers, operating out of Vancouver, B.C., has specialized in the design and repair of marine propellers since 1935. Its business design, like many propeller shops, is split between new propeller sales and propeller repair. Jody Bell has been co-owner of Osborne propellers for nine years, focusing on the sales, marketing, and design aspect of the business. We spoke with Jody this past winter to learn more about their operations and his plans for the company.

Jody Bell arrived at Osborne Propellers in 2010 with a vision. Osborne Propellers was already an established company with a long-standing reputation, but Jody knew they could grow further to address an evolving global market. Osborne Propellers had to adapt to stay competitive. Their main facility was too small and its technology was quickly becoming outdated. The company used traditional wooden patterns and a much longer casting process than using CAD files or drawings. Jody explained his concern: “We don’t live in a vacuum, and we really benefit by working with industry experts like HydroComp.”

Jody moved towards a closer relationship with HydroComp and quickly added the PropCad software to capitalize on Osborne’s expanding technology needs. Jody does not have an engineering background, so when he began work at Osborne Propellers he found himself relying on outside sources to help him to do his job, specifically for the propeller design. Osborne Propellers used to make the propeller pattern in-house and have the molds produced elsewhere. This was adding both time and expense to their process and designs. It was this issue which motivated Jody to acquire HydroComp’s PropCad software. PropCad is software for the geometric modeling of marine propellers, providing tools for the automatic preparation of 2D design drawings, 3D views, and construction data. 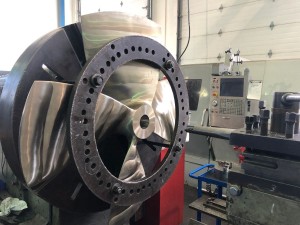 A new 55in Kaplan propeller being machined

Osborne was also using a MS Dos software system that was outdated and complicated to maintain. As Jody began to use the new PropCad program more frequently, it quickly became part of his daily routine. Now with HydroComp’s PropCad software, Jody can create the propeller model more accurately and efficiently. “It makes life so much easier, especially for someone like me, who had to learn the business on the fly.” The program has become a great asset to the design half of Osborne.

The custom propellers produced by Osborne are typically for workboats: heavy-duty and durable. They are made of bronze, NiBrAl, stainless steel, Superston, and aluminum. However, the ruggedness of these propellers does not take away from the quality of their design. Osborne builds propellers to the standard of Class 1 or higher.

Osborne’s success is undoubtedly due to the ingenuity of its present owners, who have challenged the status quo and has strengthened their position in the industry. From Alaska to South America, Osborne’s customers are impressed by their expertise and solid results. Jody credits Osborne’s partners in business, including HydroComp. “PropCad is incredibly useful,” he reiterates. “We couldn’t do what we do today without it.”

As Osborne Propellers continued to grow, it became apparent that their current facility was no longer adequate. At the time of this interview, the company was putting the finishing touches on their brand new location. It was easy to tell that Jody was incredibly excited as he described the new workspace: “It’s double the size of our current facility. Everything is behind concrete and glass now, no need for outside storage.”

Osborne Propellers’ willingness to work with others in the industry has been rewarded. Their business has expanded internationally, but notably the company has developed a stronger market in Canada. “We’re the only ones in Western Canada that do what we do,” says Jody proudly, “and now we’re starting to pick up a lot of business on the East Coast as well.”

Read the full interview with Jody Bell of Osborne Propeller…