Further Than We’ve Ever Gone

Tecnadyne’s first interaction with HydroComp was as a consulting client for the development of new propeller and nozzle designs as updates within their thruster product line. Some years later, they acquired HydroComp software and have now even superseded those early HydroComp designs with new model updates of their own. As participants in a number of HydroComp’s propeller classes, Tecnadyne continues to advance their capabilities and confidence in propeller hydrodynamics and design.

Andrew plays the multifaceted role of designer, engineer, and supervisor. With his background studying mechanical engineering at the University of California in San Diego, Andrew began a career designing and building Can-Am race cars. That was, until thirty-five years ago when he was approached about the submersible industry. The market for submersible technology was still in its infancy and Andrew was intrigued and attracted by the potential, so he dove right in! 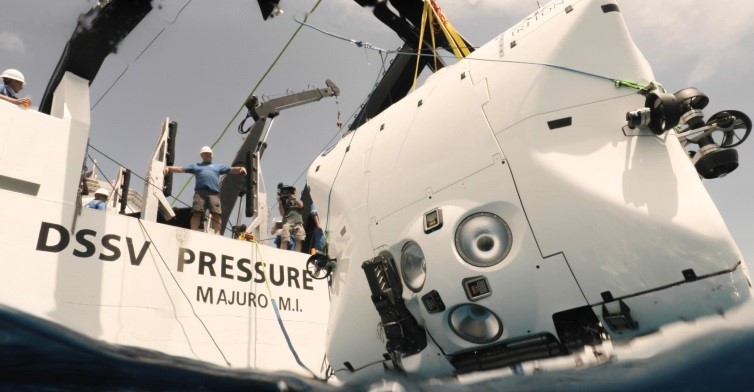 Over the years, Tecnadyne has become an industry leader in the research and development of underwater propulsion. Altogether, it has developed thirty-five different complex propulsion systems. They specialize in working on manned submarines, ROVs (remotely operated underwater vehicles), and AUVs (autonomous underwater vehicles). The latter are used mainly to ensure that commercial trade routes are vessel-safe, but are also often utilized to collect data on places that are difficult or even impossible for humans to explore. Tecnadyne’s main markets are original equipment manufacturers and academic research teams. They work both locally and internationally, having about a 50:50 ratio of domestic buyers to exports.

One of Tecnadyne’s customers is submarine manufacturer Triton, famous for their mission to build vessels that can reach the hadal zone, which is a term that oceanographers have given to the deepest parts of the ocean. This presents a unique challenge to those looking to explore it, because it means they need equipment that can withstand pressure of more than 1,100 atmospheres. Engineers at Tecnadyne are responsible for the propulsor motors on that system because of their expertise in building propulsion systems for that extreme depth. There are few vessels that have breached the hadal zone, and most of them use Tecnadyne propulsion. 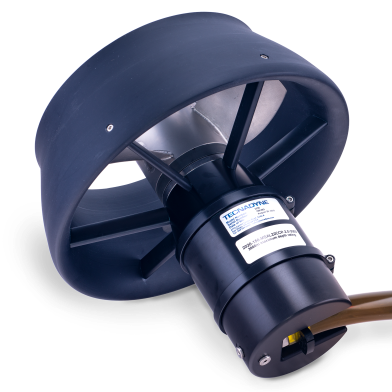 Tecnadyne’s Model 2020 thruster, similar to the ones used on the Limiting Factor

For example, Victor Vescovo recently piloted the Limiting Factor submarine (a Triton 36000/2) to a record setting dive to the deepest part of the Marianas Trench, 38,853 feet below the surface of the ocean.

Tecnadyne stands out from the competition through their use of magnetic coupling to drive the propeller. This eliminates the rotating shaft field, which has a tendency to leak over time. Essentially, it makes for a much more reliable propulsion system. Tecnadyne is now in the process of developing high power and efficient brushless DC motors, as well as custom propellers with unbelievable performance.

This success was in part due to Tecnadyne’s use of superior technologies, such as HydroComp’s PropElements software. Tecnadyne was an early adopter of PropElements, which is used for detailed propeller design and analysis. The company uses PropElements to meet propeller class requirements when designing their various propulsion systems.

“It’s a good tool for us,” says Andrew. “It has gotten to the point where we have developed a seamless workflow from PropElements to Rhino to our other technologies.”

When asked about his “average day at work,” Andrew only laughs. He explains that every day brings a different and unique project. It is intellectual work, pursuing ideas and pushing boundaries. As we advance further into a future reliant on human curiosity and innovation, companies like Tecnadyne will be instrumental in achieving an expanded understanding of the world around us.